We built this thing! 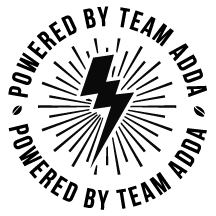 As your friendly Adda Coffee & Tea baristas, we’re proud to put our creative energy into hosting our guests and serving you the best coffee and tea we can. While we’ve been closed, we channeled that creative energy into building more spaces for Adda guests to come together; amplifying our message of community and conversation.

Our new website (isn’t it a beaut?) was 100 percent-powered by the team at Adda, who hung up their aprons and took to their computers to write, design, film and build all of the new content you see. With a little coaching from our partners, nine baristas became three writers, a project manager, two web designers, two videographers and a social media manager, all while still minding the stores and gearing up for when we can serve you again. This team has absolutely rocked the task of making Adda more engaging, active and community-oriented, whether you are in the store or checking us out online.

Adda has always been a place to gather and learn. Now, we’re dreaming up new non-profit, artistic and culinary partnerships as well as musical events and menus. We’ve launched an online bazaar selling the crafts and products of other local small businesses we think will enrich your world. Let Adda share the best of Pittsburgh with you, all in one place.

Thank you for subscribing! Welcome to the Adda Family!
Oops! Something went wrong while submitting the form.